Prior to Appleseed’s birth, the English colonists, who first arrived on our North American shores in the 1600s, found only the native crab apple tree. As settlement in the new world grew, Europeans brought favorite foods with them, thus, the beginning of the apple tree as we know it. But, according to a history website, the trees didn’t do so well. There were no honey bees. It was only after the honey bee was introduced by the English that the apple tree population began to thrive.

A short 200 (give or take a few) years after the arrival of the apple tree to our land, enter Johnny Appleseed. Born John Chapman in Massachusetts, it is said the tin-capped nurseryman planted apple seeds from Pennsylvania into Ohio, Kentucky, Indiana, and Illinois.

Beginning in the early 1800s, the traveling apple tree advocate spent nearly 40 years dedicated to the westward expansion of the fruit-bearing tree, traveling by foot, planting seeds around early settlers’ homesteads and throughout the unsettled countryside.

Johnny Appleseed planted and tended several apple tree nurseries in northern Indiana, where he eventually met his demise after developing pneumonia. He is buried a few miles north of Ft. Wayne, in what is now a memorial park in his honor.

I suspect he’d be thrilled to know his love of apples caught on.

Not only do we enjoy applesauce, apple jelly, and apple strudels, we bob for apples, gift them to teachers, and take heart in the lore that an apple a day will keep the doctor away. Oh, and let’s not forgot to mention the infamous American apple pie.

I grew up not liking apple pie. I know, I was dropped on my head at birth–it’s the only explanation I can come up with. Who doesn’t like apple pie? When I was a kid, my dad’s rule was that I take at least three bites of everything on my plate. But he was more concerned with vegetables than desserts. Thankfully, somewhere along the line, my taste buds teamed up with my sweet tooth and decided it was okay to eat those savory apples embedded in sweet cinnamon goo. As time went on, I progressed to eating the entire piece of pie. Now, I can honestly say I eat the crust–and make it!

I’ve never considered myself a baker (probably because I never tried) and heard frightening rumors about the difficulty in making a good pie crust. Thanks to my cousin Mary, I’ve learned the true meaning of “easy as pie.” 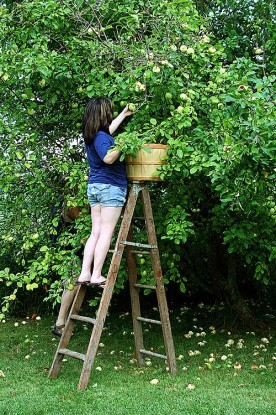 It was two days spent knee deep in peelings and cores, mixing the recipe five times the original with each batch. Our hands are still stained, but we don’t care. We like apple pie. 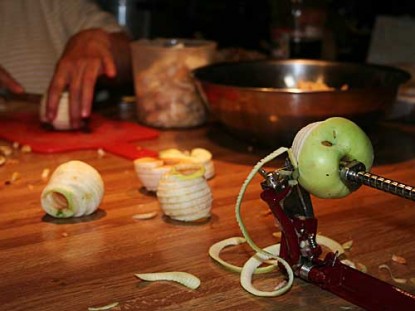 When the other apples come off later in the year, we’ll do more apple pie filling, applesauce, and hopefully some jelly. You never know, next year’s apple crop may not be worth writing home about. 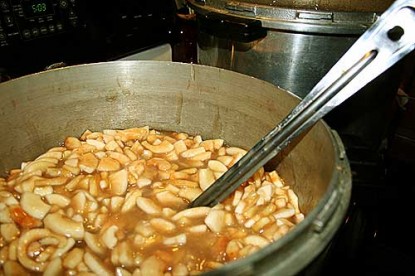 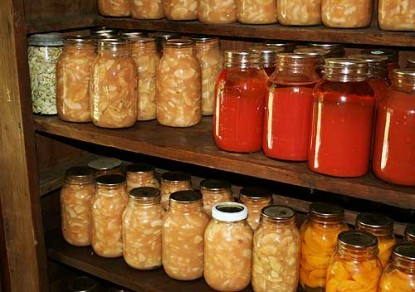 During this lull between apple crops, we’ll make up some pie crusts for the freezer. It’s usually an all-day process, with each of us taking around 20 crusts to the freezer.

Our day will end with dough dripping from our foreheads, flour dust on our shirts and the floor. A celebratory pie will be eaten, and maybe, just maybe, we’ll put a tin cap on our heads to honor good ol’ Johnny.

Our world just wouldn’t be the same without him.