Did you know that you have royalty in your kitchen? In fact, it’s a fair bet that you are never without the King of Spice. Although he may rest quietly in your spice cabinet, he sports a long and varied history. The King of Spice was buried in the mummy of Ramses II. In The Decline and Fall of the Roman Empire, Edward Gibbon claimed that the King of Spice was “a favorite ingredient of the most expensive Roman cookery.” In the early 400s barbarians demanded a ton of the spice as ransom for the city of Rome. The King of Spice has stood as collateral and for currency. A single dropped berry would be pursued as if it were an iridescent pearl. 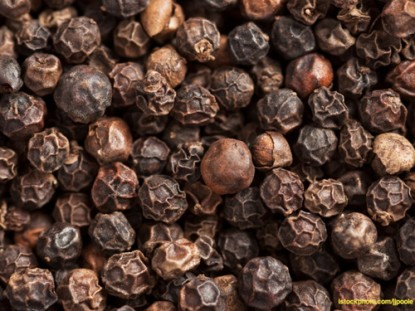 During the 1500’s, a shrewd merchant insisted that dock workers’ clothes have “no pockets and no cuffs.” The rule aimed to deter theft of the most valuable commodity aboard ship—peppercorns. Yes, pepper ascended to the spice throne centuries ago and holds it still. All hail pepper—King of Spice!

Arab traders were the first to collect pepper from its source, the Malabar coast of southwestern India. Ships transported pepper from Calicut, the City of Spices, east across the Arabian Sea, then north through the Red Sea, finally docking in Alexandria. From there traders shipped pepper, along with other spices, to Venice. By the 1200’s, Venice monopolized the pepper trade—markups of a thousand percent were common.

In the late 1400’s, high price made pepper chief among the “spices” that propelled Vasco De Gama and others to sail around the tip of Africa. They hoped to reach India and by-pass the middle men and their mark ups. Four hundred years later, the money-making aspect of spices was robust enough to fuel the design of Yankee clipper ships. These ships could sail four times faster than their contemporaries, giving rise to millionaires in the U.S. spice trading centers of Salem and Boston. Though no longer as dear as it once was, pepper is still the King of Spice. It accounts for one fourth of the world’s spice trade and people today consume as much black pepper as all other spices combined. 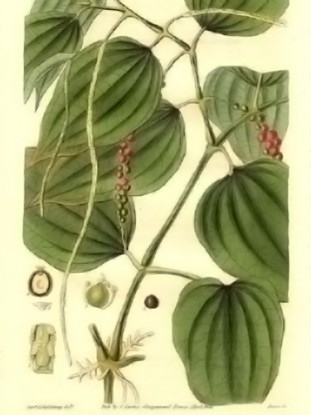 The pepper in our spice cabinets belongs to Piperaceae, a family of more than a thousand species of shrubs, herbs, and long-stemmed woody vines, including magnolias, peperomia, nutmeg, bay laurel, cinnamon, and avocado. India and Indonesia, together, produce about half of the pepper traded throughout the world. Additionally, pepper plantations thrive in Thailand, China, Vietnam, Brazil, and Sri Lanka. 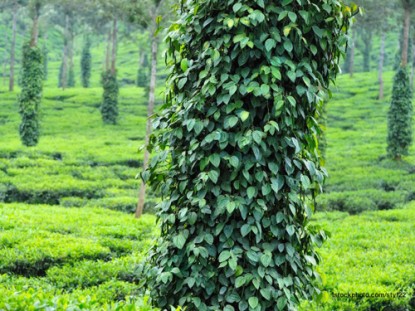 True pepper (piper nigrum) grows on perennial evergreen vines which may reach a height of thirty-five feet. Farmers coax new plants from cuttings. Plants begin producing berries in two to five years and may live as long as forty years. In southern India, tea and pepper plants are often grown together; the pepper vines grow on supports and loom above delicate tea plants. 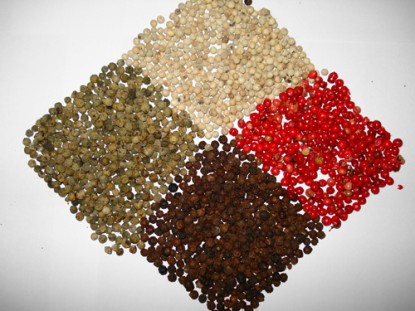 A variety of harvest times and processing methods produce four different types of peppercorns. The plants’ white flowers give way to small green berries, as the berries ripen they begin to turn yellowish red in color. 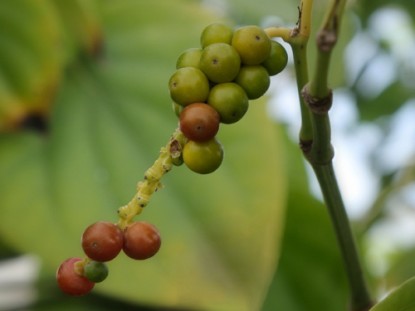 The harvest begins as soon as one or two fruits at the base of the spikes begin to turn red—before the fruit is mature, but when it is full grown and still hard. Fruit that ripens loses its pungency, and ultimately falls off spikes and is lost. 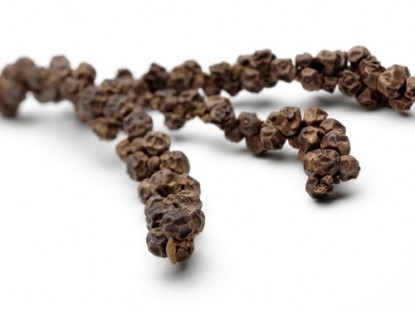 Black pepper has a sharp and penetrating aroma and it tastes extremely pungent, spicy, and tangy. Gourmet black peppercorns include Tellicherry and Malabar. Tellicherry berries are larger than most with a strong flavor and pungent aroma. Malabar has a similar flavor but a sweet and fruity aroma. Black pepper adds interest and delectability to all manner of food, from soup to nuts and everything in between. 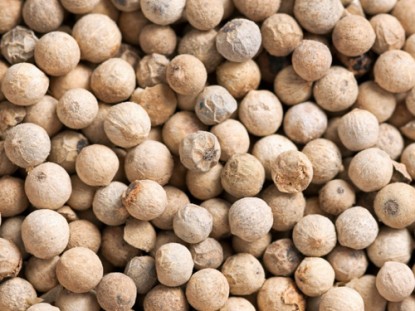 White pepper processing begins with optimally mature pepper berries. The berries are kept under running water for 7 to 9 days to soften their outer covering which is then removed by scrubbing. Finally, the peppercorns are rinsed and sun dried for 3 to 4 days, during which they develop their white color. White pepper is more expensive, less aromatic, but hotter than its darker cousin. White pepper comes into its own in soup and on grilled meats and poultry. 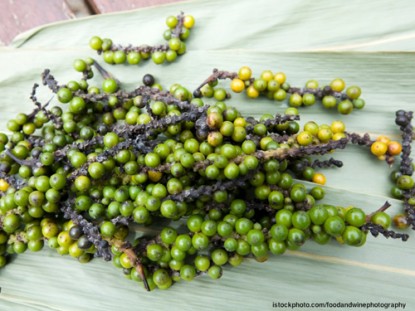 Green peppercorns are full-sized but not yet ripe berries. These may be preserved in brine, vinegar, or citric acid. Alternately, they may be boiled in water and then air or freeze dried. Green peppercorns are highly aromatic and have a piquant, fresh, and lively flavor. They complement both duck as well as game and form a vital part of Thai cuisine. 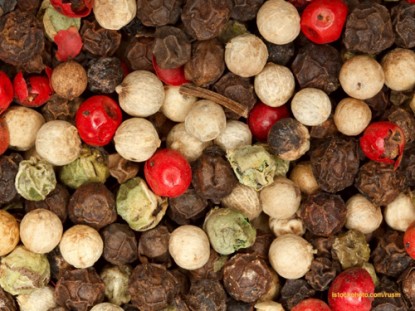 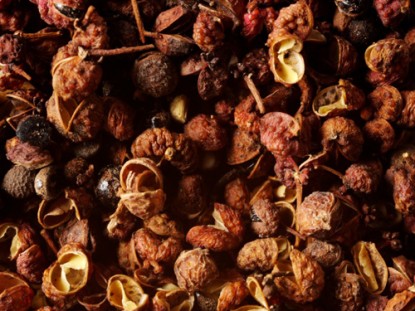 One pretender is Sichuan pepper (Szechuan pepper), the outer pod of several members of Zanthoxylum. Sichuan pepper is stronger and more pungent than most black pepper and constitutes a key ingredient in many Chinese and Japanese dishes. 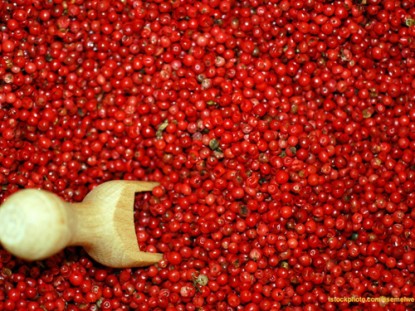 The flavor characteristics of any pepper are better retained in whole peppercorns, rather than ground. Pepper should be kept in a tightly sealed glass container in a cool, dark, dry place. Whole peppercorns will keep almost indefinitely, while ground pepper stays fresh for about three months. Once frozen, pepper’s flavor becomes more pronounced. By the way, it is unlikely the ancient Romans and others used pepper to disguise the taste of spoiled food. If someone could pay pepper’s high cost, then they likely could afford untainted food. 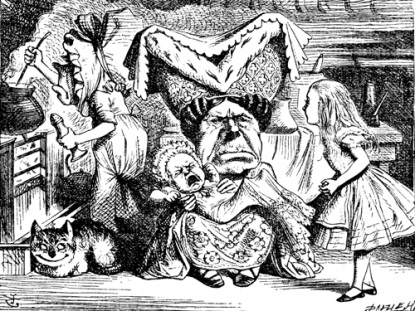 “There’s certainly too much pepper in that soup!” Alice said to herself, as well as she could for sneezing. (Note the pepper mill in the cook’s hand.)

The pungency in pepper comes form the presence of piperine, an alkaloid found in white, black, and green pepper. One explanation of Alice’s sneeze claims that piperine irritates the nerve endings when it enters the nose. This irritation causes the reflex reaction of a sneeze. In contrast, the aroma of pepper comes from its essential oils. Pepper’s essential oils also underpin claims that black pepper can influence health. For example, the essential oil may help in relieving muscular pain, fever, and in increasing blood circulation. Some studies suggest that black pepper can act as an antidepressant as well as an antioxidant to help lower cholesterol levels. Some claim the King can act as an effective deterrent to insects. When mixed in a 4-to-1 ratio with water, black pepper is credited with killing rodents, ants, potato bugs, and so on. Sources are unclear as to whether the oils poison the pests, or they sneeze to death!

The first known collection of recipes, dating from the third century, includes pepper in a majority of its offerings. Why not invite the King of Spice to participate in a re-creation of an ancient Roman dessert? Tie an apron over your toga and jump in!

Grind boiled and cored pears with pepper, cumin, honey, passum, garum, and a bit of oil. When the eggs have been added, make a patina, sprinkle pepper over, and serve.
— Apicius, IV ii 35, from A Taste of Ancient Rome

If you prefer a more modern interpretation of this pear recipe, find it here.

Other recipes which accord pepper the respect it so richly deserves found here at Farm Bell Recipes: