One of my favorite memories from childhood is eating spaghetti pancakes with my best friend who lived across the street. Every time his mom made them, both my sisters and I would run over to his house and with the help of his brother, the five of us would devour them instantly.

For those who don’t know (and I haven’t met a single person besides my old friends and sisters who do), spaghetti pancakes are exactly what they sound like. It’s a savory pancake, but made with spaghetti instead of flour. It sounds odd, but trust me, they’re amazing. 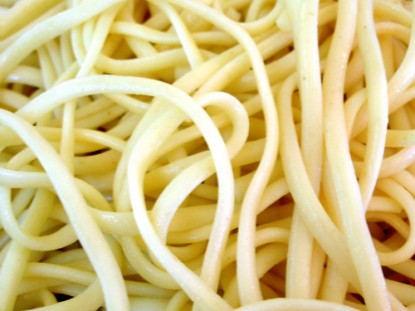 Unfortunately, my neighbors moved when I was ten and until about a year ago, I didn’t have any spaghetti pancakes. That’s a long time to go without them! I called my oldest sister to see if she remembered anything about them, and it turns out she had tracked our old neighbor down herself to get the recipe not too soon before I asked her. What luck!

It turns out, they’re super easy to make! There are only three real ingredients, which I always have on hand. Spaghetti, an egg (or two) and Parmesan cheese are all you need. That’s it! Really!

This recipe is for one serving, since I’m usually just making them for myself before work in the mornings.

To start out, crack and scramble one egg in a bowl, then add 3/4 to 1 cup cooked spaghetti. I usually used left over spaghetti from the night before. If I know I’ll want some pancakes, I’ll cook up a bit extra and put it aside to be sure I actually have some for the next day. Stir this all up so all of the pasta is coated in the egg, then add in a tablespoon (or two) of the Parmesan cheese. Sometimes I’ll sprinkle in some freshly ground black pepper or garlic powder. If I’m feeling extremely crazy that day, I’ll put in some red pepper flakes (we like our food spicy at my house).

Once all that’s mixed up, heat up a skillet on about medium heat. Once it’s nice and hot, I spray just a bit of no-stick spray in mine to make clean up easier. Twirl a good amount of spaghetti-egg mixture on a fork and place in the skillet. I try to get two or three good “twirls” of it out of each batch. Use a spatula to flatten your mounds of pasta into pancakes and let cook until they’re slightly browned, then flip.

This can take me from 2-5 minutes depending on if the burner’s are acting up or not that day. Cook for about the same amount of time on the other side, and slide them right out of the pan. You’re done!

For me, this is a quick breakfast, and it’s pretty darn good for you, too! If you use whole wheat pasta, you’re getting lots of fiber to keep you full during the day. The egg adds the perfect amount of protein to give you some energy, and the cheese just makes it taste so darn good!

I like to eat mine with either a bit of hot sauce on top (I told you we like spicy food!) or with a really nice slice of fresh tomato or two. These also make a quick and inexpensive dinner when I’m feeling lazy or the husband is working late.

So next time you have some leftover spaghetti, go ahead, give these a try! I hope you enjoy them as much as I do.