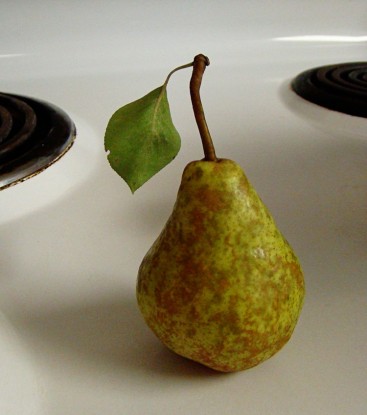 This year, I got some pears right off of my mom’s tree. I’ve never picked pears before. We usually get them from generous friends who pick for us.

When we saw them ripening on the tree, my first question was: How do you know when they’re ripe? None of us knew, so I looked it up.

Turns out that pears ripen from the inside out. That means that by the time they’re soft on the tree, they’re way too ripe in the middle. You have to pick them before they get soft.

Also, pears hang down on their stems. If you hold the pear and lift it up horizontally, the stem should separate from the tree easily. If the pear doesn’t come off easily, then leave it.

Because I have No Patience when it comes to ripening fruit in boxes all over my house [remind me someday to tell you about the year we had a box of pears rot on the floor because we forgot about them. The wood floor is permanently stained. It’s an attractive stain, but it would have been nicer if it were that color all over the floor and not just where the box was.] I cook my pears right away now.

Yes, I cut them when they’re too hard to cut. I risk life and limb and digit trying to carve out the core. Then I put them in a big pot with some water and cook the living daylights out of them until they’re really really soft. 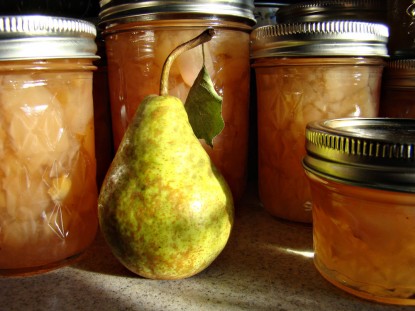 Really. Just look at that picture. It’s perfection in a jar.

Troubleshooting: First a confession. Often, I have too much fruit for a recipe. I try to add as much fruit and as little pectin as I can get away with. This time was no exception. And whoops! my jam didn’t set. It got sort of thickened, but not jam like. I figured that it just didn’t get hot enough in the pot I was using.

Tip: Use a pot with a wide bottom – more surface area next to the heat source.

We kept some of the non thick stuff to use for pancake topping. The rest I took out of the jars and dumped back in a pot and heated it until it reached a hard boil and I let it boil for a few minutes. I could tell that it had finished thickening. I poured it back into the jars (I did lose some volume because more of the water boiled out of the jam), put new lids on and sealed them again. Perfect thick jam.

My point is this. Experiment if you want to. Don’t panic if things don’t come out perfectly. It’s not a contest. There is no Permanent Record. It’s food. It’s supposed to be fun. If you use your head and adjust things a bit, you can probably fix it. Ask around, join a forum like the one at Chickens in the Road, or ask me in a comment. Chances are someone will have some tip to help you.