Have I ever mentioned I love old cookbooks? There’s much more than recipes in these old cookbooks. There is a plethora of information–things you never knew you needed to know, things you wished you’d known before and things that relate to the modern cook who wants to get back to old-fashioned “scratch” cooking. 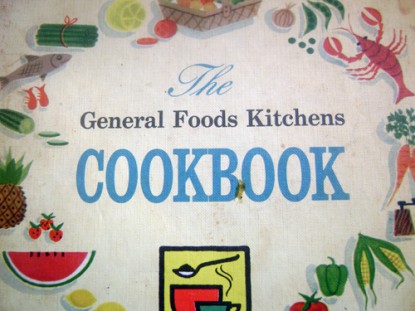 I’ve been helping Mom organize. One of our latest organizing dates involved her cookbooks. She has LOTS of cookbooks even though she doesn’t do much cooking anymore–she loves reading them, especially the old ones. That was how she used to cook. She remembers those recipes that you don’t find anywhere but in an old cookbook anymore.

I brought a few of her cookbooks home with me. The one I’m perusing now is The General Foods Kitchens Cookbook from 1959. Want to know what to do if you’re interrupted in the middle of cooking, sort of forgot what you were actually doing in the kitchen, something wayward happened and you don’t want to throw it all away? This book has wonderful goof fix ideas–some I’ve heard of and some I’ve never thought of! 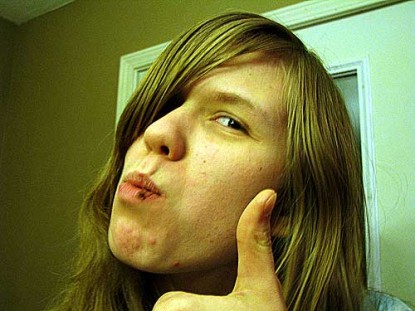 How to Get a Thumbs-up from a Kitchen Goof:

If you burn the beans–quickly dump the part that isn’t stuck into another pan and add enough water to complete the cooking. Don’t put fresh water into a pan where there is scorch; it will merely ruin the flavor of the unscorched bits.

If the fudge won’t fudge–you probably haven’t cooked it enough. Scrape it back into a saucepan, add a teaspoon or tow of water, and cook and stir until it reaches the doneness called for in the recipe. Remember that weather is a big factor in candy making. In a hot, moist atmosphere, it’s a good idea to cook candies to 2 degrees higher than usual.

If the fudge gets too hard or sugars–add a little milk to soften it and cook to the right temperature.

If a cream sauce or gravy is lumpy–whip briskly with a wire whisk or beater. If the condition is really bad, pour through a wire strainer.

If a custard sauce or pudding separates or begins to curdle–place the saucepan over cold water or dump the mixture quickly into a cold bowl to stop the cooking immediately. Whip with a wire whisk or beater. Remember to cook custard slowly, just until it coats a dry metal spoon.

If Hollandaise separates–remove it from heat immediately. Add an ice cube and beat.

If honey goes to sugar–stand the jar in a pan of hot water until honey liquefies again.

If a cooked icing doesn’t thicken up enough–you probably haven’t cooked it enough. Beat it in a strong sunlight (??? never would have thought of this as a heat source!), or near an open oven door, or in the top of a double boiler over boiling water.

If cooked icing starts to harden before you can spread it–you probably have cooked it too long. Beat in a few drops of lemon juice or boiling water.

If a gelatin mixture becomes too jellied to fold in other ingredients–warm it for a few minutes then let it set again to the right consistency. If you’re in a hurry for it to set, set the bowl in an ice bath.

If homemade mayonnaise separates–put an egg yolk in a bowl and slowly beat in the dressing.

If homemade mayonnaise is too thick–add a little cream, whipped cream, evaporated milk, or lemon juice.

If raw milk is on the verge of turning sour–you can “sweeten” it by adding a bit of baking soda.

If popcorn won’t pop–the corn is probably too dry. Soak it in water a few minutes, drain and dry thoroughly.

If pudding is thin and won’t set–use it as a sauce.

If too much salt has been added–it is sometimes possible to offset it by adding a small amount of sugar or vinegar. In soup or gravy, try a cut-up raw potato which may absorb the excess salt. With gravy, you can also increase the amount of gravy which will dilute the saltiness.

If cookies stick to the cookie sheet–quickly run the sheet over a top burner or return to the oven for a moment.

If a gelatin mold won’t unmold–loosen jelly around edge with the tip of a sharp knife then put mold in bowl or sink of hot water for a moment. Place plate over mold, invert, and shake. Try again if need be.

Do you have any Goof Fixes to share? We’ll add them in!

Get the handy print page and save this to your recipe box here:
Kitchen Goof Fixes.