Have ever cooked something in a cast iron skillet or dutch oven? Or does the thought of trying to kind of scare you? 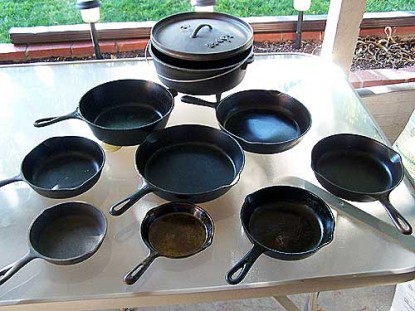 Maybe you got great-grandma’s cast iron skillet or grandma’s dutch oven and have just put them away some place. Well, get them out! It is not hard to cook in these. They come in all shapes and sizes. You can cook just about anything you can think of.

And my favorite — BEANS!

You can even do pies and cobblers.

I remember my great-grandmother, grandmother and grandfather, even my mom and dad, cooking up stuff in cast iron skillets. Everyone did bacon on Sunday mornings, eggs, hash browns, or sausage and pancakes. Pappy was great at doing his fried pancakes. (Just batter in grease. He called them fry-cakes.)

Brings back lots of memories.

I carried a cast iron skillet for years when camping, hunting, or fishing. And the more you cook in them, the better the food tastes.

If you have grandma’s skillet and have not used it, first you need to clean it with soap and water. If it has some rust, don’t worry, use some steel wool, and it will come right off. After you have cleaned your skillet or dutch oven, make sure that it is dry, inside and out.

Next, you have to season it, and now you get to choose: you can use cooking oil, lard, or — my favorite — BACON DRIPPINGS! They now have some commercial seasoning just for cast iron. I have seen it at like Bass Pro, sporting goods stores, Army surplus stores, and even in some stores that sell all kinds of kitchen gadget who-ha stuff. (Don’t tell my male friends that I have been to stores like that. I have a reputation to uphold with my male counterparts.)

Like I said, I use bacon grease. Take a little glob and run it all over your skillet inside and out. Cover top to bottom. You really do not have to do the handle. Set your oven to 350, place a cookie sheet in the very bottom to catch any drips. Place your skillet upside down on the rack and let bake for 1 hour. Turn off oven and let it cool before removing your skillet. Careful, the handle may still be pretty warm to the touch. If there is excess grease, wipe it out with a paper towel.

Now you’ve got a skillet ready for cookin!

If you have a dutch oven you cure it the same way. Cover it with bacon grease, inside and out, lid also inside and out, and follow the same directions as for your skillet. After cooking in your skillet or dutch oven, clean up is pretty easy. Wipe out with a rag. Take a little bit of oil and wipe inside and out. Leave a bit of a shine on it and put away till next time.

The more you use your cast iron, the better it cooks and it will get to where food does not stick. If it does, you most likely have it too hot for cooking.