The summer of 1956 family vacation was one to remember. Mom and dad packed up my big sister, big brother and me, hitched up our travel trailer to the car, and headed away from Los Angeles, our typical m.o. Vacations, in those days were more about the journey and less about the destination, so exactly where we were headed, I have no idea. This summer, we drove north, up Hwy 101. Eventually we stopped at Burlington Campground, off The Avenue of the Giants, the tallest redwood trees on the planet, in Humboldt County, California. Even then, I was awestruck by their majesty and just plain hugeness. The campsite was equipped with a stone fireplace/stove having a flat metal cooking surface, and a picnic table. (You’re probably thinking, “This is supposed to be about cooking, or kitchen, or food!”, but stick with me here.) 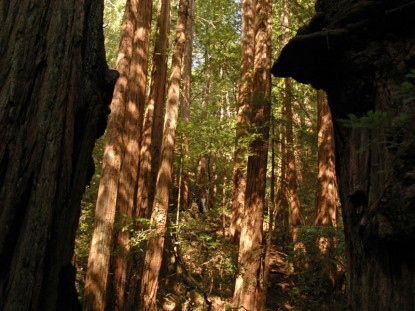 Us kids explored the nearby trees, climbed boulders, watched chipmunks stuff their cheeks with our leftover cantaloupe seeds, and took walks around the campground. Meanwhile, mom had an interesting conversation with a park ranger, who told her of an abandoned blackberry farm where we could pick as much as we wanted. It seems the famous December, 1955 flood on the Eel River had deposited rich nutrients and the berries were flourishing. He made mom promise to keep the location a secret, as the rangers were the only people who knew about it. That sounded good to mom, so off we all went, looking forward to a new experience. (Are you still with me? Do you see it coming?) 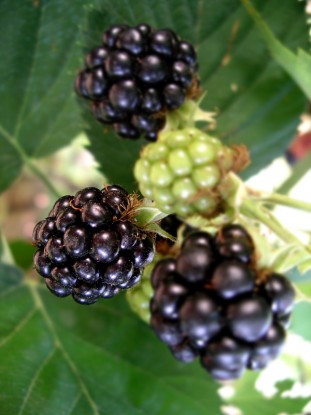 Dad, following the ranger’s directions, drove us up the highway a bit, managed to find the driveway, mostly obscured by bushes, and followed it down the bumpy, overgrown dirt road. We looked up to see silt dangling 30 feet up in the trees. Some flood! Dad stopped the car in a clearing at the edge of a small field of blackberry vines surrounded by redwood forest. Buckets in hand, we waded through thick undergrowth between rows of overgrown berry bushes. We began picking… and tasting!. They were sweet and delicious, and the size of walnuts. Walnuts. I swear! We picked buckets and buckets full. And more buckets full. That evening, and many evenings thereafter, we had ice cream topped with blackberries.

The next morning, we had berries on our cereal. Then we made the mile-ish trip to the formerly flood-devastated, partially rebuilt Weott. Mom bought jars and sugar, and I don’t know what else, being only eight. When we got back, dad made a fire in the stone stove and whittled a long wooden spoon – more like a paddle, really – from a fallen branch. From somewhere, mom brought out a big cooking pot and soon the sweet aroma of blackberry jam-in-the-making was wafting through the entire campground. Following their noses, campers began showing up. In her short-sleeved shirt, pedal-pusher jeans, tennies and apron, with dad’s big wooden spoon-paddle-thing in her hand, mom visited with them all, but never divulged the ranger’s secret.

This went on for a few days, as I recall. To keep the stove going, dad brought back free firewood from a place down the road. We made at least one more berry-picking trip and several supply-runs into Weott. To me, it was all one big, happy, berry-eating adventure, during which mom made 10 gallons of the best-ever-in-the whole-world blackberry jam. If my math is correct, that’s eighty pints. That’s a lot of jam! Then we started off for Oregon or Washington, I think.

So began our tradition. Several years thereafter, we repeated our project, although not on such a grand scale. Mom brought supplies from home, including a real wooden spoon, and cooked the berries in the trailer on a propane stove rather than a wood fire. The berries were somewhat smaller, as were the batches, but the jam was every bit as good.

We ate blackberry jam for years. Family and visitors raved about it. Eventually, I think my mom tired of the work it took (It was supposed to be her vacation, too). Or maybe we needed a change of vacation location. We began traveling to different places – great places, fun, beautiful, fascinating places, mind you, all over the U.S., but our jam making days had ended. Sad was the day when mom finally announced that the jar she was opening was the last one. Now, some 50-odd years later, I’m still grateful to mom and dad for creating such wonderful memories, I and remember the taste of our Camp Jam as if it were yesterday.