In the process of working on copying over my recipes to make them available on Farm Bell, I came face to face with a lot of my older recipes. I started Chickens in the Road in December, 2007. I had a basic point-and-shoot camera (a Nikon Coolpix). I adored it. Loved how it fit in my pocket! And it took pretty good pictures–for a point and shoot, and for what I was using it for. But then I started taking food photos and I was in ten different kinds of trouble with it. 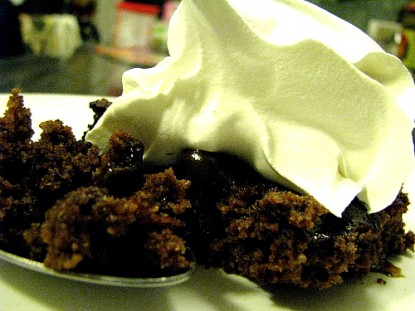 I’m sure there are more things wrong with this picture (posted in January, 2008) than I have time to explain, but I’ll hit the top two glaring issues.

1. FLASH! This photo was taken at night, inside, using flash. Note the way the photo is overbright, all the depth washed out of it. The whipped cream practically reaches out and BLINDS YOU.

That photo is a crime against chocolate pudding cake, which is far too good to look so bad.

The solution to overbright, flat, washed out photos? TURN OFF THE FLASH. Take pictures in natural light! (Can’t emphasize that enough. Never use flash. NEVER.)

2. FOCUS! This photo was taken with a basic point-and-shoot camera. It was not designed to take super-macro shots. You might as well ask your point-and-shoot to do a tap dance.

The solution to blurry close-ups if you have a basic point-and-shoot? Don’t even try to take shots that close. Work with what your camera was designed to do. Back the truck up. You may have to experiment to find out what your camera can handle and still deliver a sharp focus–take photos from several increments of distance so you can choose the best result.

Recently, I took some fresh photos of chocolate pudding cake to repair that post with something that wasn’t quite so embarrassing. I now use what is considered a “mid-range” camera. My new camera (a Canon SX20 IS), like the camera I bought following the Nikon Coolpix (which was a Canon S5IS), is a bridge camera between the basic point-and-shoot and a serious (and complicated and expensive) true SLR. There are many cameras to choose from in the mid-range. These cameras cost in the $300-$800 range–there are several Canon models in the lower end of that range. (I love Canon! Notice I’ve bought two Canons in a row.) My next camera will be a true SLR, when I can afford it, but for now, the mid-range camera does well for me. It allows for a great deal of manual setting–and also comes with a great Auto–so cameras in this range are good for learning about the more complex manual settings while still allowing you to shift to Auto when you want to. I’m gradually moving to using less Auto and more manual settings.

While I’m still not entirely satisfied with the result of my chocolate pudding cake reshoot, there was a definite improvement. 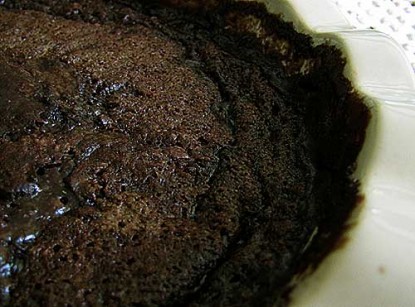 This photo was taken in natural light using manual settings for a super-macro close-up. No flash, no blurry shot. Notice how you can see the real texture and color of the pudding cake.

What’s still wrong with that photo? I don’t know for sure–it still doesn’t look quite right to me, and I’m probably just not good enough yet to figure it out. In another two years, I’ll know more and I might think this is an embarrassing photo! And for what it’s worth, I find that encouraging. 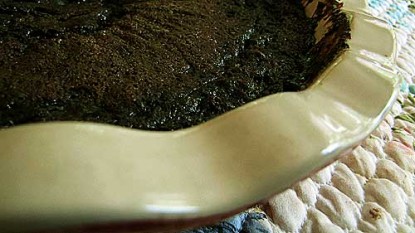 For all that I don’t know now, what I do know is that as long as I keep practicing, I’ll keep getting better. And I hope that is encouraging for you, too, because that is the whole reason I’m showing off Photo #1 up there in all its humiliating glory. My new photos aren’t perfect, but oh how much better they are than Photo #1!

By the way, here is how I shot that photo in natural light–I took the dish outside and staged it on top of an old doll blanket (which I use in numerous shots for my blog). This is our table on the porch. It’s a covered porch, so I’m able to get indirect light (which is best for food photography–direct light is too harsh). 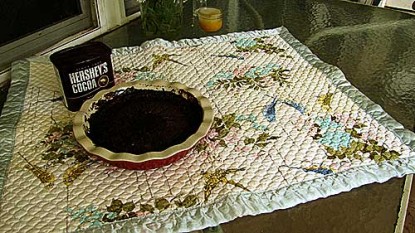 I also often use my dining room table for food photos. It’s surrounded by windows, lots of natural light.

If I had been using a basic point-and-shoot, I would have backed the truck up and taken the photo like this: 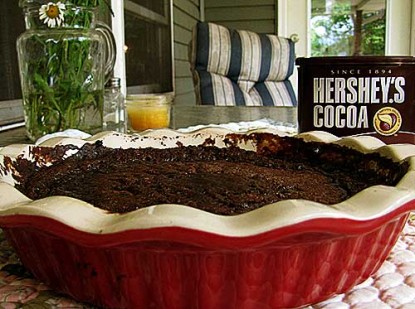 And even with the mid-range, more capable camera I have now, this is still not a bad choice as a lead photo for this recipe. I have yet to figure out how to take great photos of chocolate, and the contrast of the dark chocolate with the light dish is probably what is bothering me about the close-up. (I have similar issues with taking photos of black cats, black goats, and so on.) When you back up, the dark chocolate/light dish contrast dissipates due to the addition of other objects and colors in the photograph.

I’ll keep working on it! How about you?

P.S. You really should bake up some chocolate pudding cake, by the way! It’s a quick and easy recipe, and you probably have all the ingredients on hand already. See the recipe here: Chocolate Pudding Cake. And, if you’re game, take a picture! Upload it to the gallery here on the chocolate pudding cake recipe and show us your stuff! I’d like to see how your photos of chocolate pudding cake come out! Maybe I could learn something! (For details on how to upload to the picture gallery on any recipe post, see this post for a tutorial.)

P.P.S. See another embarrassing before and after food photo here.