You’ve probably heard the joke: What does it mean when you see a woman buying zucchini at the supermarket? She doesn’t have any friends! For those of you who plant your own zucchini, you know the truth of that statement. Sometimes it’s hard to use them up and give them away fast enough.

I personally love zucchini. When I was young, I had dreams of publishing a book full of zucchini recipes. (This is before they did stuff like that!)…but alas, I’m sure by now someone (or many) have beat me to that lofty goal.

But that doesn’t stop me from creating with zucchini. Recently I came across a recipe for Zucchini Pancakes. I modified it a bit and decided they seemed more like a zucchini version of a potato latke to me, so I also changed the name to Zucchini Latkes (which I know is just a technicality as latkes are pancakes). Just seemed more fitting to me though, since I think of latkes as savory and pancakes (generally) as sweet.

How to make Zucchini Latkes:

Shred 4 cups of zucchini and place in colander for at least 30 minutes to drain extra juice. Pat dry and add to a mixing bowl.

Add the following to the zucchini: 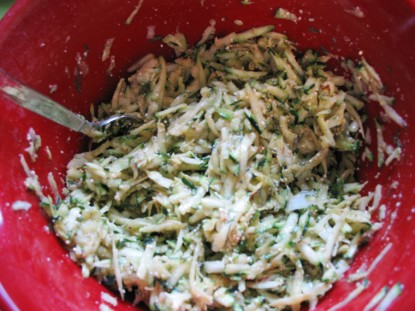 Preheat a frying pan on medium high with a bit of olive oil. Scoop zucchini mixture into pan and flatten slightly with a spoon. Cook for 3-4 minutes or until starting to turn brown. Flip and repeat. 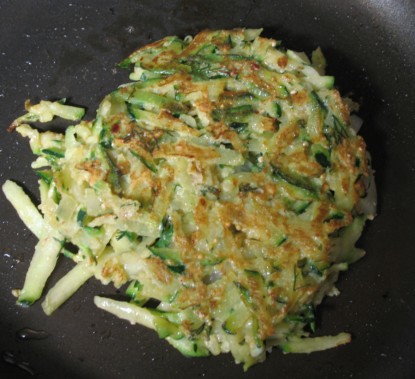 I personally like them just plain, but they’re also good with a dollop of sour cream on top. 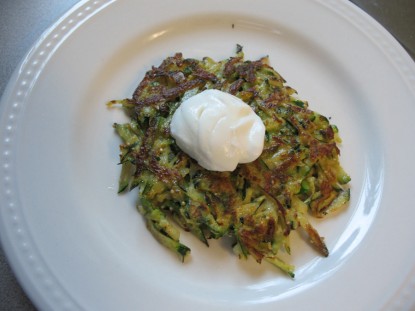 Get the handy print page and save this to your recipe box here:
Zucchini Latkes.