It seemed like a meal that wasn’t meant to be.

I had houseguests, and they were of an age where meals must be served on schedule for health reasons so blood sugar levels didn’t slip and the agony of bedtime reflux could be avoided. The kitchen was hot, but the oven was cold, and so were the coil burners. The stove, it appeared, had gone on strike. We checked this and that, determined that the problem wasn’t a flipped breaker, a bad breaker, or something unplugged. The clock on the stove worked, but nothing else did.

Then one of the guests discovered the roast. On the floor. It was still wrapped in the white freezer paper the butcher uses, but one corner had been gnawed away. “I guess the roast is thawed now,” said one of the guests with a deadpan expression. I’m pretty sure I heard him snickering as he walked away though, the ornery old man. I would have asked then if things could get any worse, but as my daughter says, it’s best not to tempt the irony gods. (They’re the ones behind Murphy’s Law, and who hasn’t run afoul of that one?)

I took a deep breath, closed my eyes, and counted to ten. Then I began to improvise. First, I started a batch of rice in the rice cooker because with rice as a base you can turn a lot of food goofs into some sort of casserole, stir-fry, or side dish.

I trimmed away the portions of the roast that had been nibbled upon, then deboned it and trimmed away most of the fat and connective tissue. I cut what was left into bite sized pieces, suitable for stir-frying. That particular cut of meat wasn’t ideal for a true stir-fry meal, but it would do well with a quick browning, followed by a slow, moist simmer.

I looked through the fridge and decided I had the right ingredients on hand for a Southwest style skillet dinner. I chopped some onions and green peppers purchased that morning at the farmer’s market. I quickly husked a bag of sweet corn — also from the farmer’s market, and grabbed some tomatoes. Since I wasn’t sure how many tomatoes I’d need, I washed the whole basketful and brought them all out to the table on the porch where the rice already was cooking. 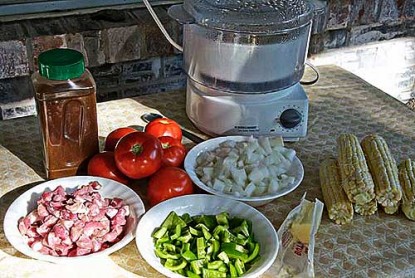 To salvage this former pork roast dinner, I set up the electric skillet on the porch table by the rice cooker where I was out of the way of the old man who was still tinkering with the stove in the kitchen. I started by cooking the onions in butter. Olive oil would have worked as well, but I really like butter and with everything that had gone wrong, I needed the comforting fragrance of hot butter sizzling in the skillet with the onions. 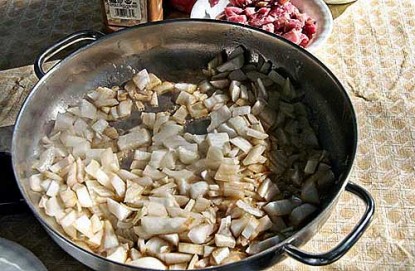 While the onions were cooking, I cut the corn off the cob and set the bowl of kernels aside. I had plenty of time for that since I like my onions nicely browned and beginning to caramelize. When the onions were sufficiently cooked, I added the meat and stir-fried until the pieces were mostly browned. 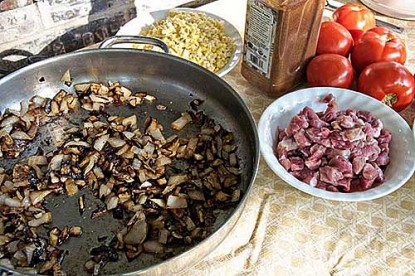 Next, I tossed in the peppers and corn. I realized then that I’d missed a lot of the corn silks when I cleaned and cut the corn. That happens sometimes when I’m not wearing the right glasses, but it’s not a big deal for this particular skillet dish. Those bits of corn silk cook down to nothing and disappear into the rich sauce created by all the vegetables, meat, and broth. 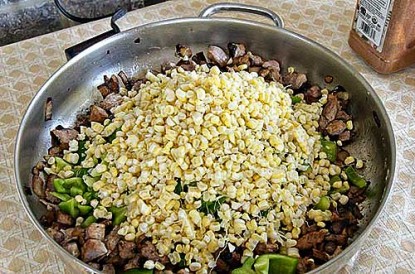 To spice things up, I added two teaspoons of my favorite chili powder. That’s plenty for a lightweight like me and my houseguests, who have sensitive stomachs. Had my guests been from the spicy hot branch of the family, I’d have added another teaspoon or maybe even two of the chili powder. 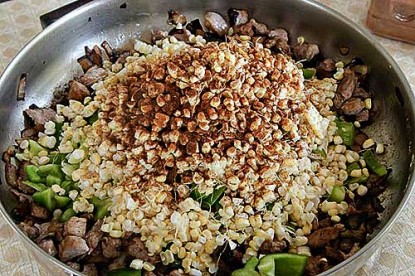 Then I took a moment to admire the colors. I just love the butter soft shades of yellow in the bi-color corn, with the crisp pepper green, the red-orange of the chili powder and the soft brown shades in the meat. So pretty! I’m ready to shop for yarn in those colors. (Is it wrong to plan a sweater around the colors in your food?) 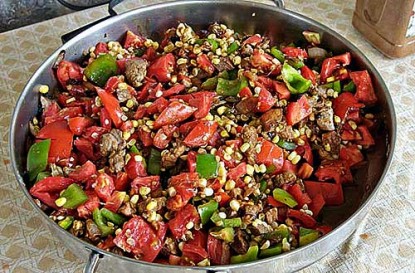 I added four chopped tomatoes, then stirred everything up and assessed the balance. Then I added another chopped tomato so the proportions looked about right. The next step? Cover and simmer for 20 minutes. I checked every few minutes to make sure there was enough liquid. I’ve made this with really juicy tomatoes and not needed to add a single drop of additional liquid. This time, though, I used fairly meaty tomatoes, so about halfway through the simmering time, I had to add about a cup of broth to keep the mixture from sticking. 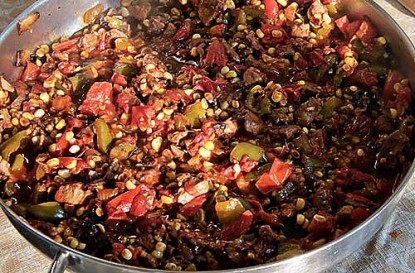 After about twenty minutes, I deemed it finished to the point of just right. Less cooking time is fine if you like fresher flavors and a bit of crisp left in the vegetables. More is good too, as it allows the flavors to continue to blend and develop. We served the chili pork and vegetables over the rice. Some of us sprinkled cheese on top, and some didn’t. 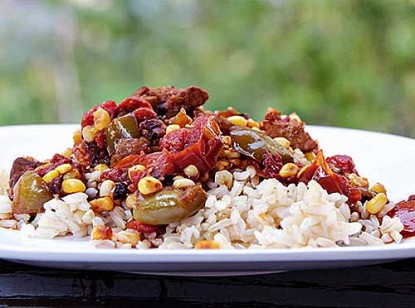 The recipe scored high with the guests, despite having been made up out of desperation at the last minute. I’d make it again, and I’d serve it again to guests, too. And I’ve added it to my toolbox of tricks for days when everything seems to go wrong, but people expect to be fed anyway.

What do you do on days like that? Do you have a never-fail, fall-back recipe? A favorite save-the-day appliance? Share your secret in the comments so we can all expand our repertoire of tricks for surviving kitchen disasters.