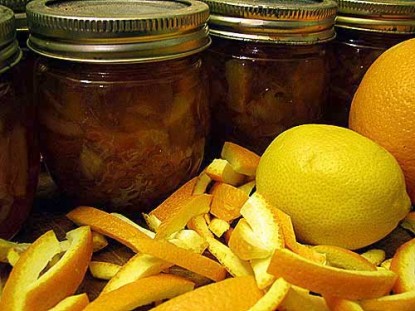 Chop and slice everything up and combine it all in a big pot with the water. (Do not add sugar yet!) Bring to a boil then simmer for 5 minutes. Cover and let sit for 12-18 hours. I started my marmalade in the evening so I could let it sit overnight.

For me, the measurements took 5 large oranges and 2 medium lemons. I had some orange peel left over. You can use any remaining peels in other recipes, dried for potpourri, or even added to a tea ball to steep in your hot tea. No wasting!

After 12-18 hours, bring the pot to a rapid boil and cook until the peel is tender. (It will have already softened up some after sitting for hours.) When peel is very tender, turn off the heat and measure the mixture. I used a 2-cup measure and transferred it to a large bowl then dumped it all back into the big pot when I was done. Add one cup of sugar for every one cup of mixture. Turn on the heat under the pot again and stir until the sugar dissolves. Bring to a boil over high heat, stirring constantly. (Add a bit of butter to prevent foaming.) Cook rapidly almost to the gelling point.