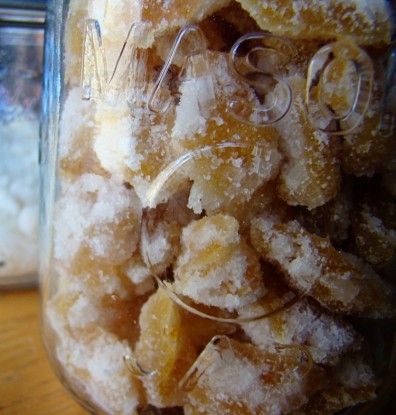 My experiences with candy have not been exactly successful.

Entertaining, yes. (See How NOT to Make Horehound Candy.)

So, it’s been a while since I’ve done the candy thing.

Even so, I’ve been thinking about making candied ginger for a long time. And now is the time.

Excuse me while I steel my nerve.

People. This was sooooo much easier than I thought. Seriously.

I tried the first method first because it seemed easier but the ginger stayed tough and very VERY hot. Also, not sweet enough.

So, I tried the second method. We have a winner!

Here is what you do:

1. Buy fresh ginger. The roots should be firm.

2. Peel the ginger. I saw on Cooks Illustrated that it’s easier if you use the side of a spoon to scrape the peel and it worked like a charm. 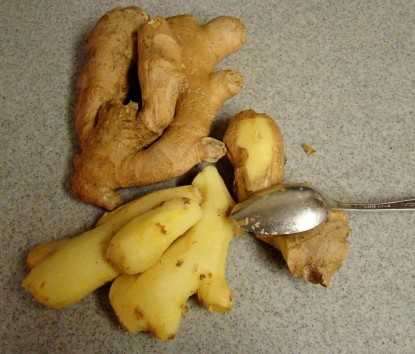 3. Chop the ginger–in chunks or slices, whatever you want. You do not have to slice it paper-thin like some recipes say. I did chunks. I like chunks. Chunks are great. 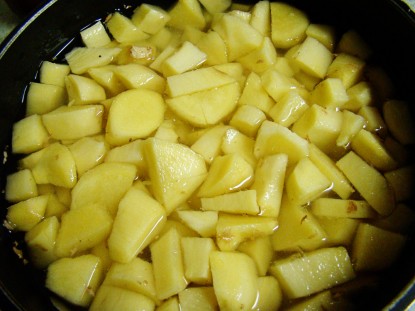 4. Put the ginger in a saucepan. Measure the water you put in. Put in enough water to cover the ginger.

5. Put an equal amount of sugar in the pan – that’s why you needed to measure the water you put in. 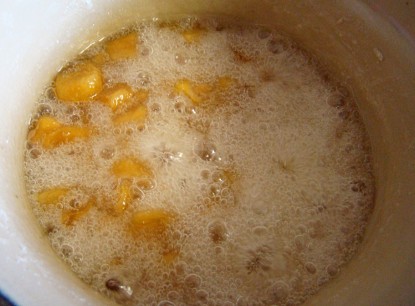 6. Boil for 45 minutes or so. The ginger will shrink some and turn golden in the center as it cooks.

7. Drain the syrup off the ginger. Save the syrup! It’s very hot, but great for fruit salads, homemade ginger ale, or drizzled over grapefruit and broiled. Plus you need a bit of the syrup for the next step.

The first set of recipes I studied stopped here. Dry the ginger for several hours or overnight. Make sure the pieces aren’t touching as they dry. Toss with sugar. But really, don’t stop here! Keep going!

8. Measure the ginger as you put it back in the saucepan (or another smaller one).

9. Put an equal amount of sugar in the pan and 2 tablespoons of syrup for every cup of ginger.

The sugar and ginger will look damp, but not at all wet. You might think it looks too dry. That’s okay. As soon as things heat up again, the ginger will release more liquid and it will get wetter. If you think you need more liquid, add a bit more. It won’t hurt and it will make you feel better, which is important when you’re making candy. I know.

10. Put the pan on medium heat and let it come to a boil. You can turn the heat down a bit if you want to, but you want to keep a good boil. Stir OFTEN. Keep an eye on this. As it boils way down, you’ll want to stir constantly so that it doesn’t start to burn.

11. Boil until all of the liquid boils out and the sugar separates and gets dry. Stir constantly at the end!

13. Put paper under a cooling rack. I used the shelves from my dehydrator. Worked like a charm.

14. Spread the ginger out on the rack to cool and let the sugar fall through onto the paper. Keep the sugar! 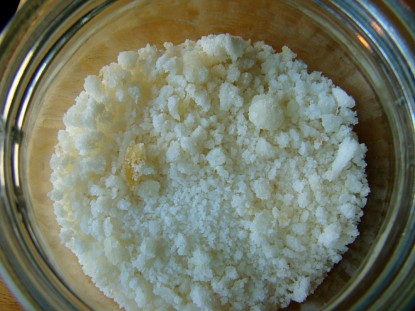 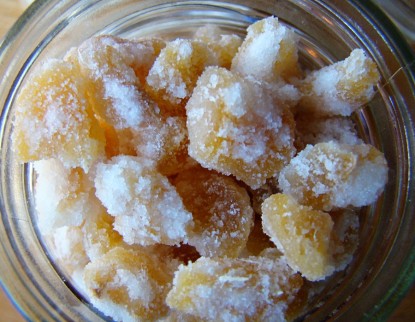 Keep your ginger and sugar in jars, away from humidity.

Get the printable and save it to your recipe box:
Candied Ginger