Most summers I complain about the excessive heat and humidity, but keep on sweating through it. Hearty meals give way to light summer fare–fresh vegetables eaten raw or steamed, quick-cooking stir-fry, cold sandwiches, and lots of fresh, locally produced fruit.

Lately, the heat has made me too queasy on many days for even my favorite summer foods. I frequently find myself falling back on the eating habits that carried me through the morning sickness of three pregnancies so many years ago–toast, crackers, and light healthy snacks throughout the day. Maybe it’s age. Maybe it’s the influence of the several young mothers-to-be in my circle of friends. Whatever the cause, I’ve been thinking more about cracker recipes and fine-tuning my technique.

If you’ve never had fresh, made-from-scratch crackers, you’re missing out on one of life’s simple joys. They’re quick and easy to prepare. I can make them in less time than it takes me to drive to town to buy a box of the store-bought variety, and the ingredients are cheap, easily pronounced, and always on hand in my kitchen. 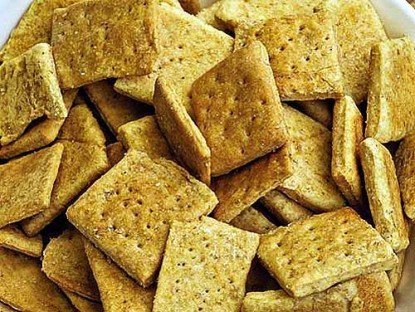 Preheat the oven at 375 degrees F, and have a greased cookie sheet or two ready. 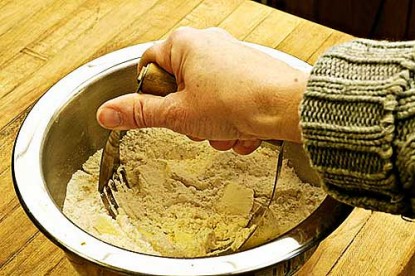 If you don’t have a pastry blender, you can use two table knives or even a fork. Keep going until the butter and flour mixture resembles rough crumbs. Stir the mixture a little, just to make sure there’s not a sneaky chunk of butter hiding down there somewhere. 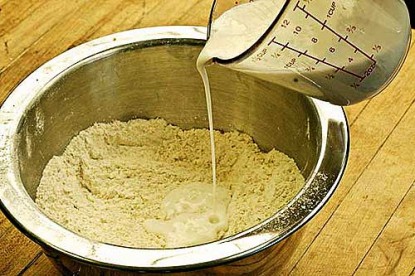 Mix gently with a fork until the liquid is absorbed and the dough sticks together. If you have obvious wet spots and extra flour, keep stirring. If you have a layer of extra flour at the bottom, you can sprinkle in a tiny bit of buttermilk over the dry stuff, then stir some more. Caution: if you must add extra liquid, do so in very small increments. Too much liquid creates a sticky dough, and that’ll give you all sorts of problems when you roll it out. 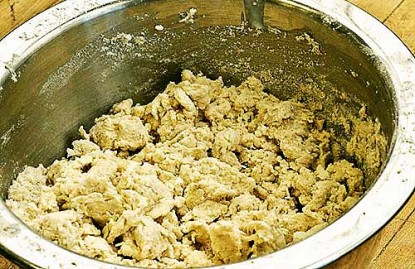 Now stick your hands down in that bowl and quickly shape the dough into a ball, then divide it in two. 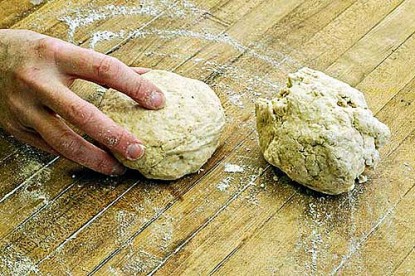 Lightly knead each of the smaller dough balls to smooth the texture. Do it quickly, and don’t overwork it. You don’t want the heat from your hands to melt the butter in the dough mixture. That’ll make the crackers tough instead of crispy.

Most cracker recipes suggest rolling out the dough between two sheets of plastic wrap or waxed paper. I hate using plastic wrap for two reasons. 1) It seems to me like a wasteful use of plastic. 2) The plastic wrap is a lot of trouble to work with, always sticking to what it shouldn’t and not sticking when it should. Maybe that’s just a personal conflict between me and the plastic. You go ahead and use it if you want. I’d rather use waxed paper, or nothing but a bit of sprinkled flour on the rolling surface. 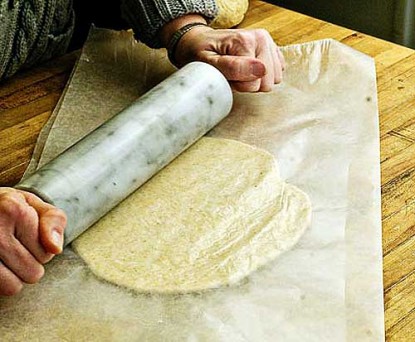 A side note: the good part about using waxed paper is there’s no big flour mess to clean off the countertop. But the waxed paper tends to wrinkle up, and the dough sticks to the paper. As I recall, I had less of a problem with this particular issue the one time I used plastic wrap. But then there was that whole battle over the plastic wrapping up on itself.

With this particular batch, I had a little too much moisture in the dough, so it did stick some to the waxed paper. That’s usually easy to deal with. Just pull the paper back slowly, a little from this angle, a little from that. Take your time. If you don’t get in too much of a hurry, the paper will come off cleanly. You only need to remove the top sheet. 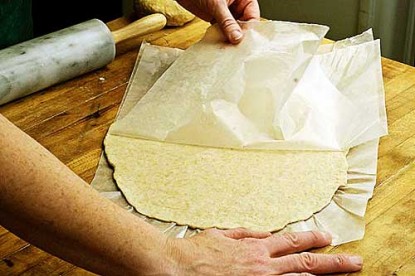 Use a pizza cutter or a knife to cut the dough into strips about 1 1/4 to 1 1/2 inches wide. Cut across the strips to make squares. 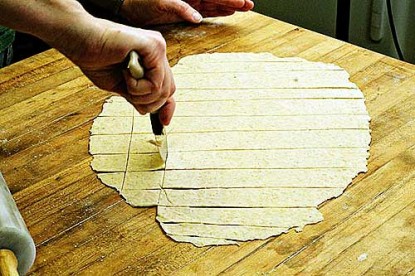 Side note #2: The dough squares in the photo are a little too thick. I tend to have that problem when I roll out the dough between waxed paper sheets. Thinner crackers crisp up nicely. The thick ones, not so much. The thick ones are still edible, and they keep my queasy stomach settled when I don’t feel so well. They just aren’t as tasty, and they don’t have that delightful crisp texture that makes a cracker a cracker and not . . . say . . . a dog biscuit.

Optional step: Sprinkle a little salt over the top of the cracker dough squares once they’re on the cookie sheet.

The finished crackers should be dry and slightly browned. They’ll harden as they cool. You can cool them on racks, on sheets of brown paper, or just leave them on the cookie sheet if you have a safe place to put them where they’re not likely to be bumped. Trust me, all it takes is one little bump of the pan for ten of those crackers to go flying off.

One last optional step–lightly brush some hot, melted butter over the crackers when they come out of the oven. 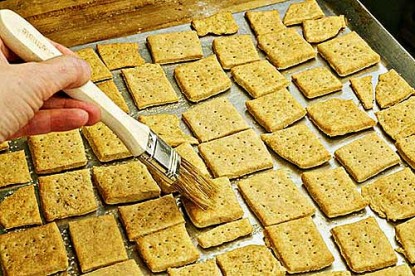 When cool, toss the crackers into a bowl. Leave them nearby for handy snacking. They’ll be gone by the end of the day. Or sooner. Much sooner. Especially if you put a bowl of dip close by.

Find this recipe on Farm Bell Recipes for the handy print page and save it to your recipe box:
Basic Whole Wheat Crackers