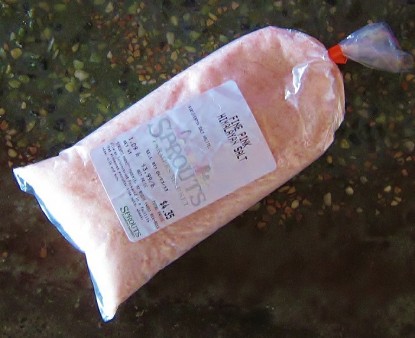 A few days ago, I was at the store with the husband and stumbled on a bag of Himalayan Pink Salt. I picked it up, looked at it, and thought, “Salt is salt. Why would anyone pay $4 a pound for salt? This isn’t the Middle Ages…” I was just about to put it back when he said (somewhat snidely), “You aren’t going to buy some stupid pink salt, just because it is all pink, are you?”

Well, of course I am…now.

There really isn’t anything special about pink salt. It is just salt with a higher content of iron oxide than normal table salt.

From Wikipedia—Himalayan salt is a marketing term for Halite (commonly known as rock salt) from Pakistan, which began being sold by various companies in Europe, North America, and Australia in the early 21st century. It is mined in the Khewra Salt Mines, the second largest salt mine in the world, located in Khewra, Jhelum District, Punjab, Pakistan, about 300 km from the Himalayas, about 160 kilometres from Islamabad, and 260 kilometres from Lahore, and in the foothills of the Salt Range.

The salt sometimes comes out in a reddish or pink color, with some crystals having an off-white to transparent color. It is commonly used for cooking similar to regular table salt, brine, and bath products. 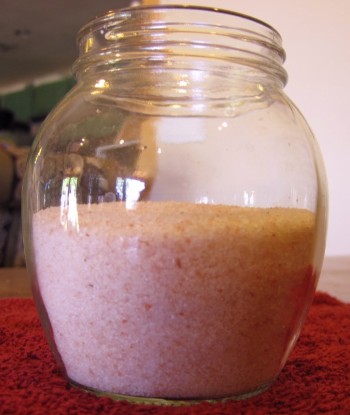 So I put the salt on the table, just for funsies, and my husband says something to the effect of, “It’s just salt. They dye it or something, to re-market an old product as healthier.”

Yeah, I know. Oddly enough I had the same thought, one whole paragraph ago. I DID go to the same business school as you, Dear Heart.

Instead of getting snide (out loud), I decided to mess with Mr. Know It All. Just a teeny-weeny bit. The next day, I got out a the last of the Morton’s Kosher Salt, some Wilson’s cake dye, and a whisk. 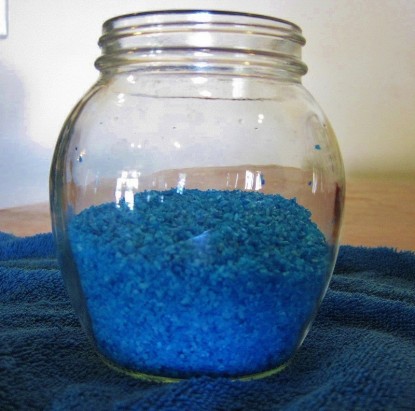 I put it on the table and the husband asked, “What is that?! It looks so cool.”

“Well I looked up the Himalayan Pink Salt, and you were right.” I replied. “It was pretty much normal salt, with a little iron oxide in it to make it pink. It wasn’t healthier or anything. But while I was looking, I found there was this type of Caribbean sea salt, which is all natural, and has a higher nutritional content than normal salt.”

“Really?” he asked, swallowing it hook, line, and sinker.

“Really. Isn’t it cool? The locals call it ‘sal de azul de oceano’. They say it is blessed by the little mermaid and gets its color from the jewels on her tail.”

“Neat!” he said, sprinkling a little on his dinner.

He didn’t ask why it turned his rice blue.