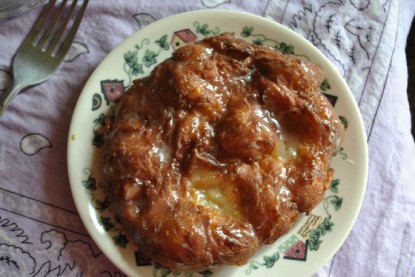 My own creation of an apple fritter using Grandmother Bread and some additions.

Make the bread according to directions, adding the butter, egg yolks, cinnamon and apple mixture along with the first 3 cups of flour. Let rise until double.

Flour the counter really well and use about 1/2 a cup of dough out at a time. Roll it into a ball on the floured counter, then stretch it into a thinner round (imagine stretching a pizza crust).

Fry in 350 degree oil. Cook about 2-3 minutes on each side, until golden brown and delicious. Drizzle with Vanilla Glaze.