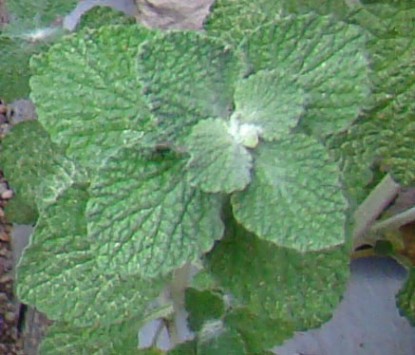 I began studying herbs when I was in high school. While other people were at football games and movies, I was in the library. My taste in books was varied. I read lots of murder mysteries and I loved books about plants. Although I never planted a garden back then, I drew elaborate garden plans on old math papers and eventually all that planning practice paid off when I was a graduate student and found myself living in an apartment in an old house, the back yard of which had been turned over to me to ‘do something with’. After considerable earth moving and wall building, one shovelful and rock at a time, I was ready to plant. I planted an eclectic selection of herbs, annuals and perennials and some of those plants are still with me today, three houses later. For the first time, I could look into all the gardening catalogs I had been acquiring and actually buy some of herbs I had been lusting over.

Take for example the first time I tried making hard candy. I had been studying herbs for some time and I came across a recipe for horehound candy, something that my grandfather used to really like and my mother still likes. I acquired a taste for it when I was in college in Salt Lake City. I had had some horehound candy every time I had gone to visit the Beehive House, a local historic spot, which is one of my very favorite places in Salt Lake City. The tour through the Beehive House is basically a look-but-don’t-touch affair so one of the things they do there to make visitors feel like they are actually connecting with the spirit of the place is give a little lecture about the medicinal qualities of the plants in the substantial and very beautiful herb gardens surrounding the main house. At the end of the tour they passed around horehound candy for people to try. Then they passed around a waste basket for people to spit the horehound candy into and hard core Beehive House people, like me, spent the next five or ten minutes trying to watch, without laughing right out loud, as people screwed up their faces in disgust and as parents told their children that, “No it isn’t poison, and yes, in the olden days people really did like that stuff and it isn’t polite to talk badly about the tour guides for not warning us, so please keep your voice down.” I always thought that they should pass out the horehound at the beginning of the tour as sort of an initiation to weed out the people who can’t hack the realities of history (and who spend the entire tour asking questions like, “Did they really sleep in those beds? Did they really cook on that wood burning stove? I just don’t know how anyone could live in a place without electricity.”) Just think how much longer the carpets would last. 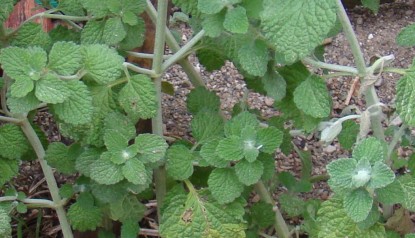 At any rate, I decided I was going to make hard candy with horehound from my own garden. I was prepared–I had water, enough horehound to drive away museums full of horehound haters, sugar, candy thermometer, big pan for cooking, wide pan for cooling, and special, finely ground sugar for sprinkling.

First, I made the horehound syrup by making a very strong horehound tea and straining out the cooked leaves and then adding the sugar. To make horehound candy, you have to cook the syrup to the hard ball stage, then pour it into a pan to cool, then you cut it and roll it in the finely ground sugar. Easy.

The first night I boiled that syrup for three hours. It got almost hot enough, but not quite hot enough and by then it was 11:00 p.m. and I decided to put it away until the next day. The next day, early in the afternoon, I started cooking that syrup again. I checked the temperature; almost, but not quite, to the hard ball stage. I decided to let it cook, but I was growing impatient, perhaps even a bit testy, and certainly defensive about my little experiment. When my husband, got home from work, he asked what was that, uh, peculiar smell. (It was at this moment that I was struck by the fear that I had married a closet horehound hater. Why, oh, why had I not thought to ask him about this before we got married. Would the judge consider this an appropriate reason for divorce?) I told him to leave me alone unless he could make a positive contribution to the process. He asked, “Is the syrup supposed to be turning brown like that? That’s the first time I ever saw horehound candy that color. Wasn’t it supposed to be sort of greenish?”

It was at that moment that the wooden spoon I had been holding mysteriously jumped out of my hand and grazed his left ear as it gracefully sailed by his head. To this day I maintain that it was simply another manifestation of whatever alien presence had invaded my house and affected my candy. That’s my story and I’m sticking to it.

Brown?? The recipe had never said anything about brown. Neither had it said anything about a cooking time of seven hours. Two hours later, when it was clear that we had entered the very brown stage, but were no closer to entering the hard ball stage, I decided to pour it into the cooling pans anyway. I lined the pans with foil and poured a gallon of brown horehound goo in. Later, when we were trying to pick little bits of foil out of the ‘candy’ so we could at least see what the stuff tasted like, we decided that foil was a bad idea. Remember that.

It never got hard. We waited for the next two days, hoping it would harden. I finally threw the whole sticky brown mass into the garbage. I should have marketed it as a special effects material for use in movies about mysterious foul smelling goo that preyed on the citizens of small Midwestern towns.

I turned my attention to figuring out what went wrong. I thought maybe it was our altitude. People said, no, it isn’t the altitude. We have no altitude, we live in the Midwest for heaven’s sake, almost at sea level, and did I really follow the recipe and surely there’s a logical explanation.

I thought maybe someone sabotaged it. People said that was highly unlikely and that it would take someone with a gas mask on to get close enough to it to do any damage, and since I hadn’t had any visitors with gas masks on we could safely rule that out. In fact, I hadn’t had any visitors at all since roughly the time that I began boiling the vile concoction. Coincidence? Must be.

My mom asked if I had followed the directions exactly and I had said, “Yes, the proportions were exact.” She asked how in heaven’s name two cups of water turned into a gallon of syrup and I confessed that I had had so much horehound tea that I had quadrupled the recipe. (I like horehound candy.) She said that in her experience it was never a good idea to double a hard candy recipe; it never reached the hard ball stage. Remember that.

Needless to say, my brown horehound goo is a family legend now which I took far, far more than my share of ribbing for. I found out later that my temporary ineptness in the kitchen had a genetic source when someone revealed my parents’ first attempt at making apple butter. They had boiled and boiled and boiled that applesauce for three days and the blasted stuff wouldn’t boil down to apple butter. Finally, one of my mom’s friends told her that it would boil down faster if they took the lid off. Remember that.