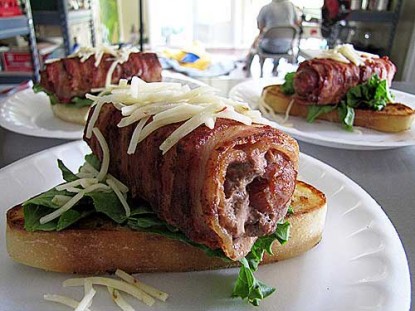 I saw this recipe on the Today show with chef Sunny Anderson. They’re disgustingly delicious.

Note that the ingredient quantities will be variable by the size of your brats. If your brats are longer than the ones I was using, you’ll need more ground meat and more bacon to cover them, so adjust accordingly.

Poach the brats in the beer; drain. (If you’re using pre-cooked brats, you’ll only need to simmer them about five minutes, for the added beer flavor. If you’re using uncooked brats, be sure you’ve cooked the brats completely. The recipe depends on the center of the concoction starting out already cooked through.)

Place the ground meat in a bowl. Add one egg to the ground meat then add whatever seasonings you like. I added garlic salt and pepper, simple. Mix well. Divide the meat into six equal parts.

Place the brat on the bacon. I used four slices of bacon per brat. Add one part of the ground meat (about three tablespoons per brat). Shape the ground meat mixture to the brat, wrapping it all the way around. Roll the brat in the bacon strips.

On the show, the chef used kitchen twine to secure the bacon-wrapped concoctions. I used toothpicks, one toothpick per bacon strip. Don’t use colored toothpicks or you will end up with spots of color on your finished brats. The heat of the pan or grill will bring out the dye in the toothpicks.

At this point, you could stash them in the fridge or even the freezer if you’re making ahead.

Place the brats in a pan or on the grill, toothpicks up. Cook on a medium-low heat. You don’t want to cook them too quickly so that you give plenty of time for the ground meat mixture to cook along with the bacon. Turn on one side. Turn again to cook on the other side. By the time you’ve cooked it this far, the bacon will be cooked sturdy to its shape. Remove the toothpicks and turn over to finish. (If you use twine, you can just cut it off when the brats are finished.)

You could place these on a bun–that’s what they did on the show–but I pan-fried slices of homemade bread. I slathered both sides of the bread in butter (because after the brats, ground meat, and bacon, we need some butter, don’t we?) sprinkled with garlic salt and parsley. Pan-fry both sides of the bread. Don’t over-fry–you want to leave the bread toasted but still soft.

Place a slice of bread on each plate. Add lettuce. Top with bacon burger dogs and sprinkle some shredded cheese on top. (Because after the brats, ground meat, bacon, and butter, we need some cheese.) To eat, just fold the bread around the bacon burger dog and have at it. If you’re dainty, you can use a fork and knife.