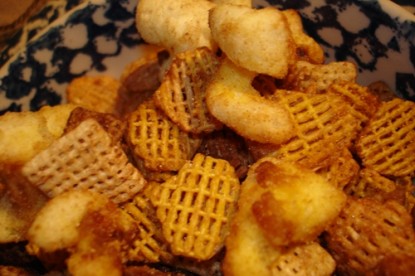 This may not be new at all to many of you, but it is to me! Someone brought some little snack bags full of a sweet Chex mix to the office before Christmas and gave everyone their own – there was quite a buzz about it right away. It was WONDERFUL and no one had tasted this before. Wellllll, I was at the store that night and right there on the Cinnamon Chex box was THE recipe woohoo! The mix I tasted used butter flavored “puffcorn” instead of popcorn which just melted in the mouth like a pinch of a cinnamon bun …. And I don’t believe it had the Chocolate Chex in it, so I used Cinnamon Chex plus Rice Chex and the “puffcorn”. This is addicting, be warned!

In small bowl, mix sugar and cinnamon, set aside.

Melt butter in a cup in the microwave and pour over cereal mixture and stir until evenly coated.

Spread on waxed paper or paper towels to cool.

Preheat oven to 350. Pour mixture onto greased rimmed baking sheet or 9×13 pan and bake in preheated oven for about 10 minutes or until heated through. Allow to cool completely and store in airtight container or bag.