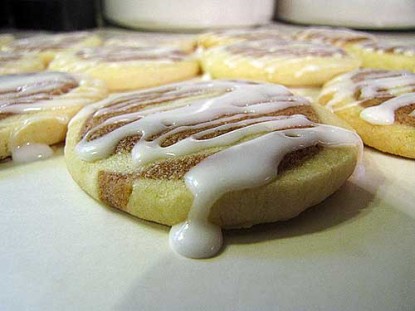 A cinnamon bun in a cookie! My made-from-scratch version of a recipe found in “Cookies” from Gifts for Giving.

Cream butter and sugar. Add eggs and vanilla; blend. Mix in flour, baking powder, and salt. Divide dough in half. Set aside one half, leaving the other half in the mixing bowl. Add the brown sugar and cinnamon to the bowl. Mix with an electric mixer until the brown sugar and cinnamon is completely incorporated. Wrap each half separately and chill for at least an hour.

Remove the dough from the fridge and divide each half into two more halves so that you have two parts plain dough and two parts brown sugar/cinnamon dough.

When you’re ready to bake, take the frozen dough from the freezer and let sit at room temp for a few minutes, just to soften enough to slice–but not get too soft. Preheat oven to 400-degrees.

Slice the dough into cookies and place on greased baking sheets. Bake for 6-8 minutes. Let cool completely before icing.