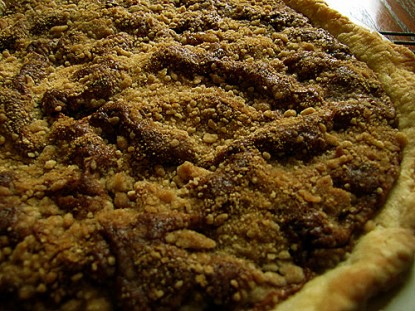 Shoo-Fly Pie is a molasses and brown sugar pie with a crumb topping. Its origins date back to treacle tarts in medieval Europe, but it gained popularity in America as settlers arrived with what staples could outlast a trip across the Atlantic by boat and intrepid cooks made do with what they had. Among these settlers were what became known as the Pennsylvania Dutch, who were major pie-lovers (like me! I am a PIE LOVER and why I don’t have Pennsylvania Dutch blood in my veins, I don’t know) and they continued to make do every late winter and early spring as food supplies ran low and Shoo-Fly Pie became their signature dish. Why it’s called Shoo-Fly Pie is debatable, but most likely because during Colonial times, baking was done outdoors and the sweet molasses filling bursting out of this pie attracted flies.

In a medium-size bowl, combine dark corn syrup, molasses, boiling water, and soda. Scoop out a 1/2 cup of the corn syrup and molasses mixture into a small bowl. Add egg and whisk together then dump back into larger bowl with the whole corn syrup/molasses mixture. To finish the filling, you’ll need to prepare the topping mixture.

Using a pastry cutter, blend flour, shortening, and brown sugar into coarse crumbs. Mix 1 cup of the crumbs into the prepared bowl of corn syrup/molasses filling, reserving the rest of the crumbs to top the pie.

Bake on lowest oven rack in a preheated 400-degree oven for 25 minutes. Let cool to room temperature or chill it. Serve with whipped cream.