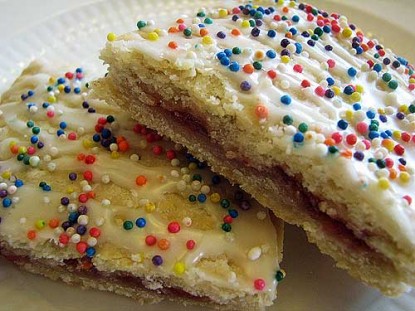 My kids love PopTarts, but I don’t love to buy them and one day it hit me that I could just make them, so I did. And wow, they are sooo good (unlike their rather cardboard-tasting store-bought counterparts), and surprisingly easy to make. In fact, they’ve made a PopTart believer out of me, and I’ve never been able to stand PopTarts from the store. These are also really fun to make with little (and big!) kids because they can pick out their own flavors and help decorate them.

1) Use a couple teaspoons jam of your choice. (Make some homemade jam and you’ll know your kids are getting real fruit when they’re snacking on their PopTarts!)

2) Or, for brown sugar ‘n’ cinnamon PopTarts (my kids’ favorite!) melt 3 tablespoons butter and combine 1/3 cup sugar, 1/3 cup brown sugar, and 1 tablespoon cinnamon in a small bowl. Brush melted butter on each piece then sprinkle with the brown sugar mixture.

For the pastry: Add flour, shortening, sugar, and salt to a large bowl. Mix flour and shortening with a pastry cutter until it looks nice and crumbly. In a small bowl, whisk together the vinegar, egg, and water. Add to the flour mixture, stirring in till well-moistened. Stick your hands in there and shape it into a ball. (Don’t overhandle.) Divide dough into equal halves. Wrap each half with plastic and refrigerate for at least 15 minutes before using. (You can also prep your pastry a few days ahead and refrigerate till Homemade PopTart-making day.)

After dough is chilled, roll out in two long strips six inches wide.

Your mileage will vary depending on how thin you roll the pastry, but you should come out with 8 to 10 big, full-size, rectangular PopTart pieces per strip. (You could also cut into smaller pieces for “PopTart sticks” instead, or cut into triangles, or use a big cookie-cutter to make circles, etc. The world is your PopTart! Think outside the rectangle!)

Place filling in the middle of the strips for the bottom layer.

Using the other strip, place tops on PopTart pieces, pinching all the way around the sides to seal. Press a fork all around the sides then prick the centers to vent. Transfer to a greased baking sheet using a spatula.

Bake at 400-degrees approximately 15 minutes, switching oven racks halfway through baking. (Note: Start baking on the top rack then move the pan to the bottom rack after about 8 minutes.) Cool and top with icing (and candy sprinkles if desired). For brown sugar ‘n’ cinnamon PopTarts, I add a dash of cinnamon to the icing.

Just try to not love PopTarts now, I dare you.